Live Improvisations on Piano and Strings

In this ever-busy world, most all of us need to create more opportunities for going “into the stillness” ….And since we can’t always take ourselves to a physical “retreat” location of choice, it made sense to try and create that place, and space, through improvised (but intentional) music. Neurologists have proven time and again that our human bodies and brains are “wired” to respond (positively or negatively) to musical sound. Even if we are personally unaware of the physiological changes happening within us, specific combinations of harmonies and rhythyms can immediately lower (or raise!) our blood pressure and heart rate, or create changes in our mood and behaviors. So, for this particular CD, while it is all improvised “live”, we kept the tempos and rhythyms within a specific relaxing parameter while choosing a range of harmonies that would hopefully be peace-giving and meditative. We decided, ahead of time, the melodies that we’d be using in our improvisational performance, but when those melodies would appear, disappear, be woven together with another one, or return again in another song – that was all “unplanned” (at least, not by us!).

We have therefore been really pleased and excited to hear that this CD has already proven to be very beneficial for bringing a sense of calm, presence and prayerfulness to those using it in the following ways: 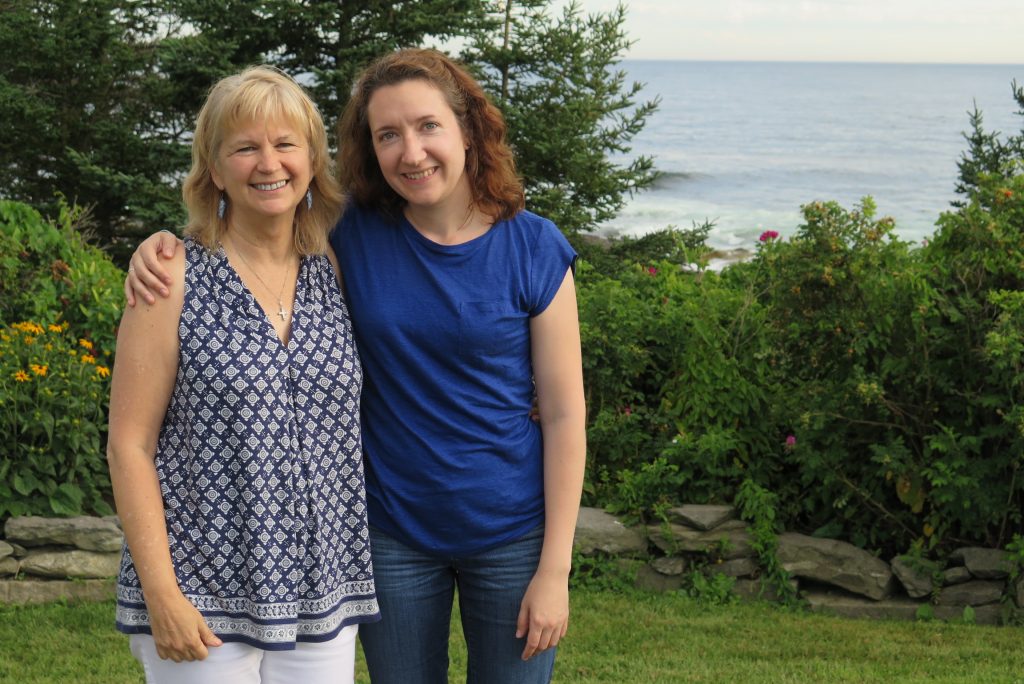 The medleys on this CD are live improvisations on more than 30 traditional song or hymn melodies, including old Welsh and English tunes, Spirituals and Gospel songs, meditative chant melodies, Gaelic joy, and much more.

Each of the titled tracks on this CD contains a medley of many different songs and favorite melodies, weaving in and out of each other, to take our listeners on a journey from one mood or thought to the next. Some of the tracks are meant to be circular journeys; others are more “linear”, moving from one atmosphere into another.

The CD includes a total of 9 tracks, totaling 42:13 minutes. The tracks range in length from 3-6 minutes each, but all of the tracks are designed to flow together with minimal space between them. This way, individual tracks can be downloaded onto your own devices but the CD can also be used as a whole, without interruption.

For specific information on the titles and composers of all song melodies included in these improvisations, Click Here!

Donna Stoering is an international award-winning recording artist, concert pianist, educator, social entrepreneur, composer, vocal soloist, and church music director/consultant. Donna has been performing public concerts since age five, composing spiritually- based songs for choirs and solo vocalists since age 10, teaching piano professionally since age 11, and conducting musicals and church choirs since her early teens. As a concert pianist and teaching artist, she has served as Artistic Ambassador for both the UK and USA to countries worldwide. A Marshall Scholar, she spent many years in Europe, also serving as Artist in Residence at Oxford University, the University of York, and several music conservatories, while composing/directing the music at numerous cathedrals and churches.

As a classical artist, Donna has performed solo recitals and concerti with major conductors/orchestras in famed concert halls, television/radio networks, and music festivals around the globe. She also enjoys playing chamber music with renowned instrumentalists from all music cultures, and performing duo-recitals with major international opera stars. But in parallel with her classical music career, she has always served as vocal soloist, pianist, organist, liturgical composer and choir director at churches in each location where she has lived, whether in Europe and UK or on both coasts of the USA.

While living in London in 1998 Donna was inspired to found the global organization Listen for Life, now in its 22nd year of projects worldwide that “inspire and empower musicians of all cultures to use their gifts in the service of others” (listenforlife.org). Directing these LFL projects has also led her to become a keynote speaker and TEDx presenter. In recent years Donna has become a sought-after artistic director and producer for music festivals and new performing arts series while hosting podcasts, radio shows and television programs sharing music and musicians of all cultures. She continues to teach piano and voice, give master-classes on “playing from the core” worldwide, release new recordings and perform concerts (solo or with other wonderful musicians like Erin), while leading international retreats for musicians and giving workshops for church choirs, cantors, and instrumentalists. (Contact: Donna Stoering)

Erin Nolan currently works at the Gifted Music School in Salt Lake City. She recently moved from Boston where she worked for the past 8 years at NPR’s From the Top, the national radio program featuring incredible young musicians ages 8-18. She worked in a variety of roles at From the Top, but for the final four years she held the role of Music Director and had the opportunity to lead the selection of young artists and repertoire for the national broadcast.

Erin received the majority of her training as a musician in Europe, having grown up in Italy and England. Although she traveled to the States for university studies, as a performer, Erin worked primarily as a chamber and orchestral musician in London, England, having performed and toured extensively as a violist in the English Chamber Orchestra, the BBC Symphony Orchestra, and the Royal Philharmonic Orchestra. As a chamber musician, Erin trained with the Guarneri, Juilliard, and Cleveland String Quartets, and in 2004, performed in four Carnegie Hall performances with Yo-Yo Ma and the Silk Road Project.

She continues to perform chamber music and maintain a lifelong love for playing and improvising “prayer music” in a variety of settings. Erin’s love of joining other musicians, whether through classical music, prayer, or traditional music of other cultures, as led to her performing with diverse groups throughout Europe and the USA, as well as in Lebanon, Panama, Bosnia, and Croatia. (Contact: Erin Nolan)

“Our bookstore has completely run out, because customers hear it playing and ask if they can purchase a copy – how many more can you send us immediately?”

“Love it SO much….the peace it gives me is palpable and I play it in the background while quilting or reading, but especially love it for car journeys in stressful traffic. Thank you for sharing your gifts in this way..”

“The string sound is absolutely gorgeous, and it is fun for me, as a professional musician, to follow the unique synergy of both performers, blending one melody into the next, sometimes quite unexpectedly but very beautifully.”

“I am a therapist and had trouble finding something to soothe a particular patient until a friend loaned me your CD. Immediate success, and I now use my own copy repeatedly – it helps me, as well!”

“…wonderful instrumental CD…do you have enough left in stock for us to make another bulk order?”

“This particular CD was a healing and peace-giving presence for us both, and a strong part of my husband’s final days and weeks on earth. We would therefore like to use it during his memorial service as well.”

“….just had to write and let you know how much we appreciate this CD – it is SO lovely!”

“…a lovely musical offering that sounds absolutely wonderful in the car!”

“My friend gave me a copy of your CD as a Christmas gift – what can I say? The music itself IS a prayer – it lifted me up today at a time when I needed it. And it has all my favorites (melodies) on it! Thank you thank you thank you for making this….. PS – I want more copies – where can I get them?”

“I’ve been listening to this CD in the evenings when I feel like being quiet, especially before bed. The two performers compliment each other beautifully and even though I do not know any of these melodies or songs used, the loving gentleness of the pieces leaves me with a warm feeling of well-being.Thank you so much for doing it!”

The cost is $22 per CD, which also covers postage, packaging and handling. You have three options for ordering:

Are you a nonprofit looking for great CDs that can be sold as fundraising items for your cause?

Listen for Life was founded by Donna Stoering in London in 1998, to respond to the needs of countless musicians and listeners whom she met around the globe while serving as Artistic Ambassador for both the UK and USA to countries worldwide.

Listen for Life’s mission is to serve musicians by inspiring and empowering them to use their gifts in the service of others. For example, LFL musicians and volunteers have worked together to save (and share) numerous music cultures throughout the globe that have been at risk of extinction, to provide sound-healing treatments for cancer survivors, to work with U.N. organizations to provide music for conflict resolution/peace-building initiatives, and to involve both emerging and world-renowned artists in performing on our award-winning “Notes for Nourishment” concerts where donations are collected for a variety of nonprofit organizations that nourish the hungry, homeless and hurting in their local communities.

As a global family of music listeners, performers, educators, composers and producers, Listen for Life has become a recognized brand/movement and an umbrella nonprofit organization for a wide variety of outreach and service projects, educational workshops, online programs, live concerts, music festivals, retreats for musicians, and in-school programs, with a separate arm of Listen for Life Productions creating award-winning media content for international television, radio, video, and online channels – along with a series of CD releases on the LFL label.

“Into the Stillness” is the most recent CD release on the LFL label. For information regarding previous recordings, upcoming releases, and other CDs in the catalogue featuring some of Listen for Life’s 250+ affiliated musicians from countries and cultures around the globe, phone LFL offices at +1 (510) 540 8136 or Email:  contact@listenforlife.org

Ready to order "Into The Stillness"?
Buy Album